BATTLE OF THE GODS: CRAZY LEGS Vs STORM BREAK THE INTERNET

Last Friday the highly anticipated “Battle of The Gods” took place at V1 Festival in Russia. The Breakin’ community came to stand still as many across the world tuned into the free live stream provided by the organizers of the event. After an hour of tuning in to seeing cleaning ladies mopping the floor dry, the internet exploded with funny memes and one liners regarding the mop ladies.

Some of our favorite memes: 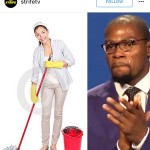 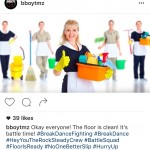 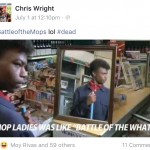 After the mopping was done and the floor was spotless, it was time for the battle. But not before 2 under cards the community knew nothing about… the wait continued..

and FINALLY, after the two under card battles, it was time for what we’ve all been waiting for.

After the battle, just about everyone had their opinion. The one that seemed to be the most popular was: INSPIRED.
To witness Crazy Legs at 50 and Storm at 46 get down as they did AND move the way they were moving, was inspiring. There was once an era in breaking
that a 17 year old was considered too “old” to break.

RESPECT to both Legs and Storm for living it all on the floor.
Respect to Top 9 and the V1 organizers for making this battle happen.
And last but not least, shoutouts to Skeme Richards for killing it on the one and two’s.