Before the Hype: Bouncing Cats 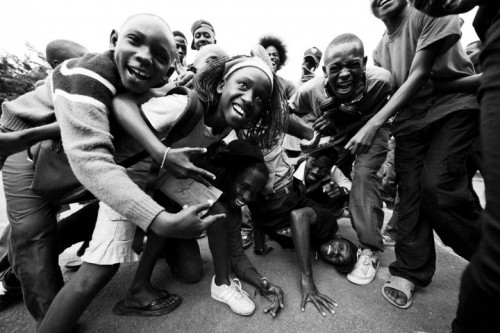 When you hear the word Uganda the first thing that may come to mind is the recent KONY 2012 video highlighting the man himself and the kidnapping of children for use in war. But if you dig deeper, you’ll find videos of people in Uganda who have expressed their concerns nullifying the impression given off by the video. You see, Uganda was the center of attention a few weeks ago because of the viral campaign that was launched by the founders of Invisible Children. Don’t get me wrong, the capturing of Joseph Kony is definitely important, but what about the children? And while I’m not knocking them for what they’re doing, one particular thing that really comes to mind in all of this is the Bouncing Cats documentary.

To give you a brief overview, Bouncing Cats is about a Ugandan bboy named Abramz who makes use of Hiphop, particularly bboying, to uplift the spirits of Ugandan children following the war and to make a positive social impact on their lives. Abramz sends an invitation to Crazy Legs of Rock Steady Crew to help teach workshops for the children. He accepts the invite and the documentary follows them both on this mission. You’ll also find celebrities like Common, Mos Def and Will.I.Am appear in the documentary which help bring more attention to the film. But back to what I was saying…

Abramz himself has been at this since 2006. 2006 is reportedly the same year Joseph Kony and his Resistance Army were kicked out of Uganda which meant the next step would be to rebuild. Abramz immediately found a way to make a positive impact despite the civil war that just tore his country apart. Documentaries like this don’t necessarily put me in the happiest of moods because of some of the children’s stories. Expect that. But also expect to see how two bboys immediately began making a difference with the people of Uganda. Expect to see how Hiphop can be used to reunite and rebuild (as it was used originally). You just might be inspired to do the same.

More information about Bouncing Cats and Breakdance Project Uganda can be found at bouncingcats.com or on Facebook.

To learn more about the showing or to find the next showing, click here.