Benji vs Menno The “Call Out”

This will be the last time we speak on the events that occurred over the weekend. Benji struck again.
At a jam in France (no surprise there) right after Menno finished his judges solo, Benji jumps on to the floor and does the exact same thing he did vs Lilou. Youval (the host) hypes up the crowd, the cameras get ready and Benji does a round. but that’s where the similarities end.

Check out the battle here:

No need to breakdown the battle since it’s clear to see how it may have backfired. Menno played it smart. He knew this was not a competition battle or a 5 round expo. He kept it simple and to the point as Benji tired himself out and then Menno struck.

What we want to speak on is the bigger picture. The bigger picture is how the community is talking about it. Most agree these kind of “set ups” are wack while others think this is real or a raw call out.

Check out what some in the community have to say about it:

Lets start off with a great podcast by Nasty Ray…

Poe One: This is a straight up gimmick on Benji`s part. Theres a time and place to call some one out. Menno handled it like a true BBoy. Respect.

Ricky Stuntman RocAny: Yo I was thinking when I saw this earlier… #Setupcats be getting hype too, like yeah we need this. Real call outs.. But to an extent this is just a sabotage exhibition. When Benji starts calling gots out in real Cyphers then call it that.

DJ Renegade: Sorry man. I thought it was wack and corny. Attention seeking. U wanna call out u don’t do it on stage like some ambush. No class. All that pretend underground thing is bullshit. Menno is there to work. And why the time limit? Menno was just getting warm.

Niels Storm Robitzky: I am glad it shows how bad it can backfire when a callout is supposed to look real, underground, spontaneous and then it really is not- Such a toy scheme. Didn´t work.

Kuriouz (Mind 180) touched on a great topic when it comes to health: Breaking is very physical and going all out after hours of sitting down can lead to a very serious injury.

And to not be bias, here is is what some bboys supporting the call out had to say:

Morris: Everybody talks about the old days of breaking well this is a breath of fresh air. Respect to both of these guys for going at it. Shout out to benji for this ill call out.

Kareem Gwinn: I guess everyone forgot about bboysummit 99 wicket flo vs kmel and wicked . That was damn near stopped in the cypher and went on stage lolol. I bet if Benji was one of ur so called ” real bboys ” or in yall’s click everyone would be praising him.

UBC Founder Mr Freeze:
It doesn’t matter what even you have,THE ULTIMATE B BOY CHAMPIONSHIP has the #1 B boy’s in the world on our team (The KING B boy BENJI) Reps The UBC. Note: comment has since been deleted.

We tried to look for more well known bboys supporting Benji’s actions, but could not find any.
(…although some of the youtube comments we’re hilarious!)

Last but not least, here is what Menno himself had to say about the whole ordeal via his instagram 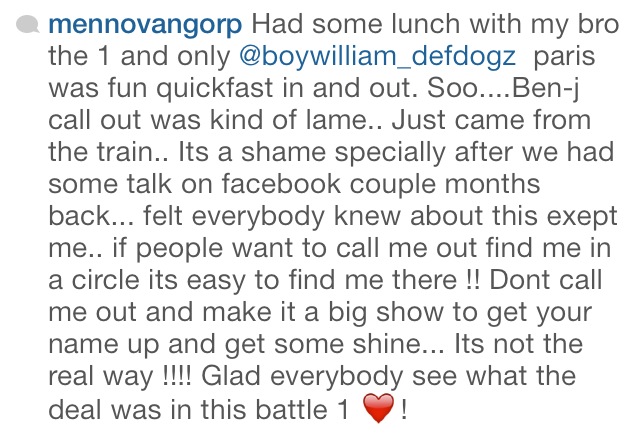 We all have an opinion about it and that’s ok. After all, it was staged for the break world to see and talk about.