During the first weekend of May, the city of Salzburg hosted the fifth edition of Circle Industry, one of the World’s illest 2on2 bboy battles. In addition, the weekend also featured a fresh battle concept called Checkmate that’s inspired by the game of chess and was founded by Mike and FraGue. 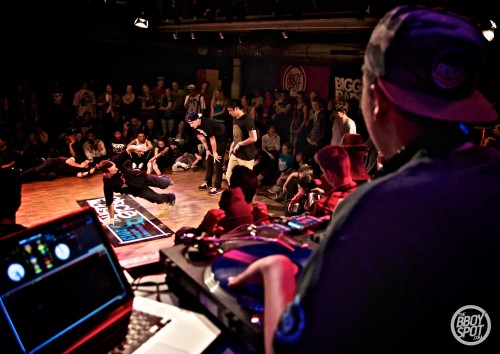 The jam featured a dope line-up of judges featuring Poe One, Pluto and Cima. DJs included B-Ryan, Woo-D, and Cosmic. Collectively, this was going to be a promising three-day weekend.

On Friday, prelims took place with over 60 crews representing. The level of skill was quite high, but only the eight best crews would advance to the finals on Saturday, where they would face eight other invited crews.

Saturday was set off with Redbull BC One Austria, followed by the 2on2 Circle Industry World Finals. Some of the invited crews were eliminated in the first round and inevitably melted into the audience to watch the rest of the battles go down.

The defending champs, Supernaturalz crew from Canada, with Morris replacing Dyzee, battled alongside Puzzles but lost in the quarterfinals to Kid David and Roxrite of Renegades crew.

Worth mentioning was Polskee Flavour that as a qualified crew from Friday, made it close to the finals. In a tight semifinal battle, judges gave two ties with Jinjo eventually beat the Polish bboys and making their way to the finals. Korea vs USA—Jinjo vs Renegades, came hard at each other, but the US bboys  took the W and became the official 2013 Circle Industry Champs. 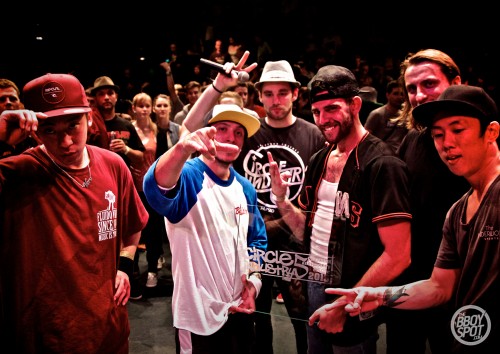 The Checkmate battles were scheduled to take place on Sunday. This was a really dope concept where strategy played the most important role for victory and put all entering crews to the test. After some really dope top 8 battles, like the Italian Last Alive Crew vs Jinjo, Checkmate moved into the semifinals.

The Squadron faced many upcoming bboys including “The Queen” Lussy Sky from Ukraine who was looking to take out Squadron’s queen, Kid David. Since a queen is the only one who can bring back the defeated bboys who lost their rounds, the strategy was clear: beat the opponent’s queen to make it easier to win the battle. After some very close rounds, the US crew managed to win and advance to the finals.

In the second semifinal, the Ruggeds were pitted up against Jinjo. This ended up being a 20-minute battle with Vero, the last man standing of Jinjo, doing back to back rounds and impressively defeating some of his opponents only to eventually get eliminated. 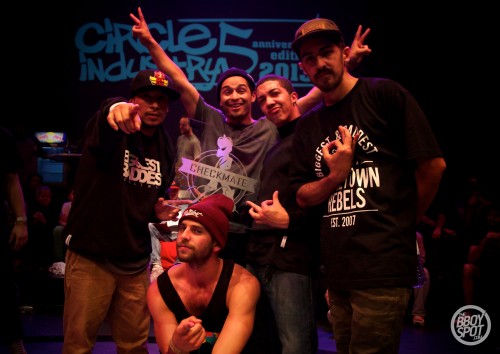 Finals took place between the Ruggeds and the Squadron. The US bboys had a solid strategy and won the battle in five rounds, without Kid David entering the battle, since there was no need to bring any of the Squadron back.

After the finals, the jam finished up with the Dutch bboys calling out Squadron with Tawfiq and Poe One jumping in and taking sides.

Checkmate Finale:
The Squadron (USA) vs The Ruggeds (Holland)

Here’s a Redbull video recap from the entire weekend put together by Miniboj. 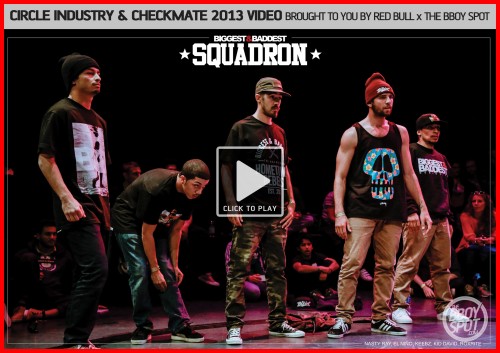 And the final checkmate battle with the call out below:

Shout out to Cosmic and Mike for bringing a dope jam for the last five years. See you at next year’s event! Peace…