The Bboy and Hip Hop community has given many of us an opportunity to travel the world, make friendships that will last a life time and so much more. While it continues to give, the question should not be, “What has the community done for you?” but instead, “WHAT HAVE YOU GIVEN BACK THE COMMUNITY?”

Recently, Teknyc of Skill Methodz held a very inspirational workshop for a very inspirational bboy, Steelo. As many of you know Steelo almost lost his life to a brain aneurism he suffered last July. We are happy to announce that Steelo is SMOKING the aneurism in that battle.
We say smoking because the fight is not yet over. 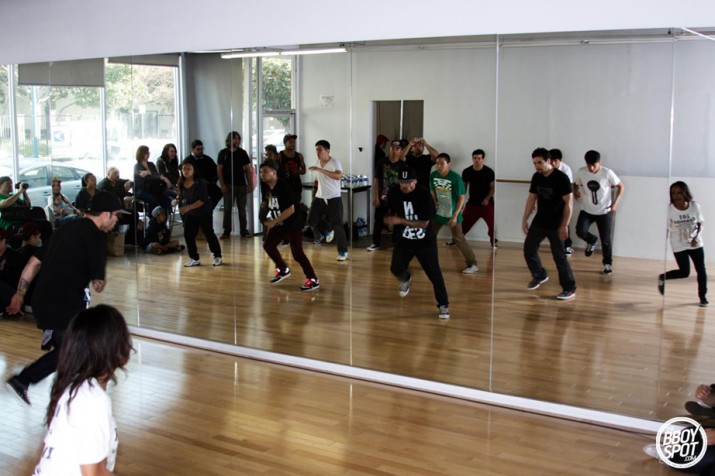 The workshop for Steelo held in Hollywood, CA

Steelo, a husband and father of a two year old son depended on his art “Dance” to provide for his family. With the setback he has been out of work since the aneurism happened last July and is still undergoing rehab to get back 100%.

The community has united a number of times to do fundraisers and benefit jams in support of Steelo. We at The Spot held “Steelo Day” and the dance community in L.A threw a huge festival in his name.

“Steelo’s energy is contagious. When he started to move & groove, everyone in the room felt it.”
– Teknyc
Teknyc also held his own workshop for Steelo in L.A on February 18th. The workshop was by donations only and all proceeds went to Steelo and his family who also attended the workshop Teknyc helped raise $480 in his one hour and 30 minute workshop.

Teknyc reached out to us to donate goodies for the peeps that showed up to his benefit workshop and in true Bboy Spot and Biggest & Baddest spirit we didn’t even hesitate.

We caught up with Teknyc to hear about this great cause.

What inspired the genius idea behind the workshop?
The idea came just from knowing Steelo’s situation. I had also missed out on the big benefit that was held for him a few months back so I felt I had to my part, plus my hope is that other peeps will take the same initiative to do one of their own in other cities and countries.

After I did mines some peeps from the U.K emailed me & told me they were inspired to do one & they did, so that’s pretty dope..

Steelo was there, How did he feel about it?
Steelo was happy, hype, overwhelmed—you can just see it in his eyes. His wife Penny told me he’d been up that day since like 8:00am asking, “What time is the workshop?” He was anxious to get there. 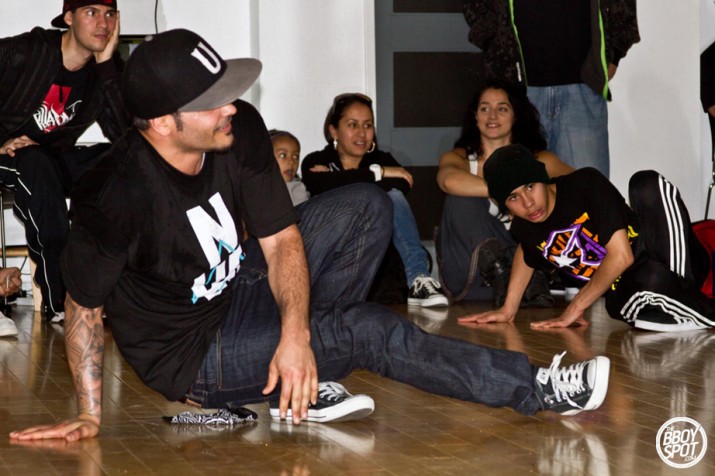 Did you see the fire inside him to want get up and hit the floor?
Bro, you have no idea. Steelo’s energy is contagious. When he started to move & groove, everyone in the room felt it. He really set the pace for the way the workshop turned out. Everyone that came out had a great time. We were all cracking jokes during the session & having a good time. I’ll never forget that.

Is this a 1 time thing? Would you be down with others doing the workshop in benefit of Steelo or any bboy in need?
Oh fo sho! Honestly man, I’m always here to help any of my people out in any way I can as long as I’m able to.

I think others should do the same. Like I said in the clip, I’m 34 years old now. I’ve been doing this 17 years. To me the human element far outweighs all the elements of Hip Hop combined.

Big shout out to Steelo & his family. To everyone out there doing this, living this culture, know that you are all my brothers & sisters. We all speak the same language. Keep on doing your thing & always moving forward. Peace, power & respect to all.