After months of hard work and preparation, Cypher Adikts, Freestyle Session USA Finals and Red Bull BC One Orlando Cypher finally went down last weekend in Orlando, Florida. Bboys and Bgirls from across the world came out to show their support and represent. I spotted bboys & bgirls from California, New York, Philadelphia, Texas, Boston, Detroit and many other cities and states. Bboys and Bgirls from countries such as Canada, Russia, Japan, Romania, Scotland and England. 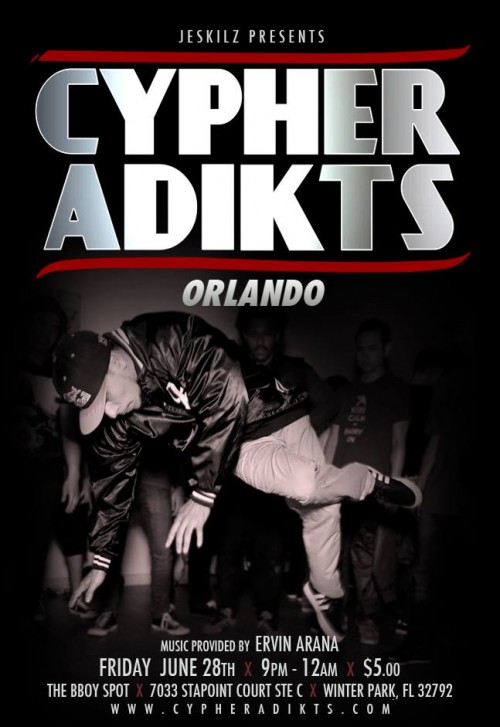 Cypher Adikts set off the weekend festivities. Jeskilz and her team (DJ Ervin and Crissy) came out to FL for the 2nd year in a row to host Cypher Adikts at The Spot. This year a wall was built to cover half of the venue so it would not be as big as before to provide a better vibe for all to get loose. The red lights were  in full effect giving it that official Cypher Adikts feel. For many bboys, it was the first ever Cypher Adikts and it did not disappoint. Dj Ervin was killing it on the 1’s and 2’s. The music was on point all night long. With so many bboys & bgirls from all over the world, the cypher stayed real consistent all night long making it another great Cypher Adikts Orlando! I heard Gravity called out Vicious Victor but sadly I missed it! Shout outs to Jeskilz, Ervin and Crissy for making Cypher Adikts the opening jam of the weekend. 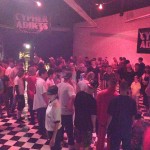 For day 2 of the weekend and day 1 of Freestyle Session USA Finals, we opened the venue in full, enclosed the outside area with a graff wall and created a really dope indoor/outdoor festival. We had writers, djs, bboys, bgirls and even a few MCs in the 2nd unit where OUR SHOW, an underground Hiphop radio show, was taking place. Red Bull provided us with their MXT truck (the MXT is a mobile sounds system, imagine a huge transformer that has speakers everywhere) allowing us to have a dj indoors and out. Nearly 40 crews from around the world signed up including crews such as: Beast Coast, HaviKORO, Mind 180, The Clique,The Squadron, Freak Show and many more. Oh, lets not forget about the world famous P-Boys. P-Boys repped in full effect all weekend long. Everyone had their eyes on the prize and that was 3 plane tickets to Japan for FREESTYLE SESSION 16 WORLD FINALS. Highlights for me and MVP was Lean Rock who killed it with the P-Boys. Known more as a top DJ in the scene, Lean is a bboy first and foremost. It was his first comp in a battle and he delivers as only a P-Boy president would. Beast Coast out of N.Y came out real strong as a squad. The only down fall of the evening was again the heat inside the venue at The Spot. It was an issue we thought was addressed but our changes to the venue did not deliver. 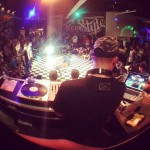 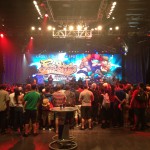 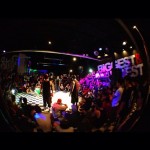 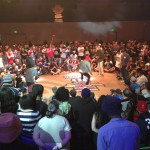 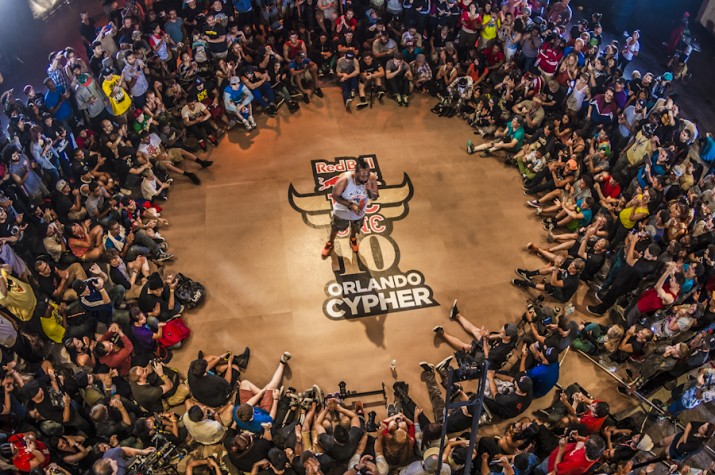 Soon after the Freestyle Session USA Finals Top 8 battles, we kept it going with the Red Bull BC One Orlando Cypher battles. We did our best to represent the bboys in the proper manner, to truly capture the vibe of what it feels like to be at a Red Bull BC One world final. According to the bboys who participated, the excitement was felt as they heard their names announced and walked onto the floor. The battle bracket was as follows:

Hosting the battles was world renown FREESTYLE KING MC Supernatural along with myself as his trusted assistant. The talent pool for the battles was insane, we had Florida Legends like Lego and Rebirth. We had some world renown bboys such as Keebz, Vicious Victor and many young, hungry bboys like Unnex, Chizo and Insight. Overall, the first round battles lived up to expectations and didn’t have any shocking surprises. Things really stepped up in the 2nd round starting with Lego losing his battle against Insight. In another somewhat of a surprise, heavy favorite Keebz was beaten by Miami O.G Tells One of Street Masters. Stripes defeated newcomer Unnex and the 2011 champion, Vicious Victor, defeated 2012 champion, Omen. Things really heated up in the semifinals when Insight, who just battled in the crew-on-crew semifinals with Mind 180, went up against Stripes and took him to the limit losing two votes to one. In the second battle of the semifinals, Rebirth almost took out another heavy favorite, Vicious Victor, but also lost two votes to one. The final battle came to 2012 runner up Stripes vs Vicious Victor. This three round battle went the distance with both bboys giving it their all. In a curtail final round, Vicious stepped up and delivered what may have been the decisive factor in the judges eyes scoring a unanimous 3 votes to none victory and he will once again represent Orlando FL in this years Red Bull BC One USA Finals Cypher. Congrats to Vicious Victor on yet another victory. 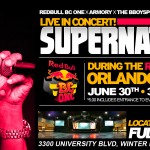 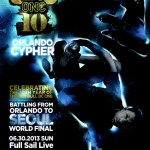 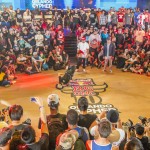 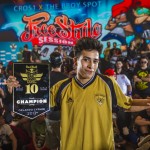 In the Freestyle Session USA semifinals, The Squadron took on HaviKORO Technique in what was one of the most technical battles of the jam. Both squads came in with their A game. Moy was killing it every time he hit the floor while El Nino was holding it down for The Squadron. In the end, The Squadron was victorious two votes to one. In the second battle, Flipside Dynasty Disorderz took on the hometown crew Mind 180. Both crews came with it but in the end Flipside Dynasty Disorderz came out with the win two votes to one. The Squadron took on Flipside Dynasty Disorderz for a shot at the USA Finals title. Both crews gave everything they had left in the tank but in the end, Squadron just had a little bit more and Nasty Ray, El Nino and Rox Rite because the 2013 Freestyle Session USA Finals champions. Congrats to them and good luck in Japan later this year.

Over all the weekend was a major success with so many bboys and bgirls talking about the great times they had. 3 different jams with 3 different vibes but all delivered as we hoped they would.

Next up for us, OUTBREAK HIPHOP FESTIVAL 10 YEAR ANNIVERSARY.