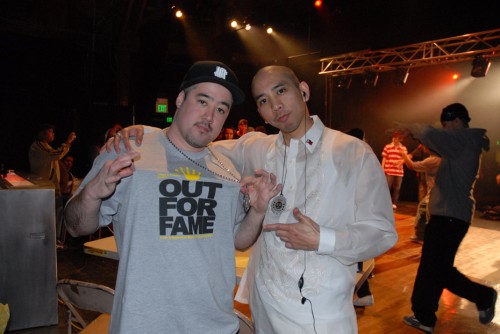 Coming up in the scene back in 1999-2000, I remember hearing about a new competition called OUT FOR FAME (OFF). OFF was a national competition taking place in many different parts of the country like San Francisco, Seattle, Portland, Los Angeles, Houston, Boston and more. This jam could have easily been called THE BEST OF THE BEST because that’s who was there from Havik and KORO (before they joined forces) to Skill Methodz, Rhythm Bugs, Circle of Fire, Phaze 2 and many more.

Check out what Paulskee had to say:

In 1999, I had a “What if” conversation with Cros1 of Freestyle Session about producing a national championship for Breaking. Cros came up to the Bay and we brainstormed both of our contacts at the time and had 16 cities planned with east coast, Midwest and west coast regional lined up. Cros had actually came up with the name Out For Fame and it clicked automatically.

We received a generous sponsorship from Thud Rumble (DJ Qbert and Yogafrog) who believed in our mission as we were young at the time and in the late 90s it was unheard of to get a serious sponsorship for a tour of this nature. We pulled it off to the best of our ability.

Through that first national tour, scenes that were not known at the time definitely got shine and that was our intention from the jump. Pre-YouTube videos, we were able to sustain and manage the tours throughout the years through VHS distribution. Those OFF videos circulated worldwide letting the rest of the world know the USA was not playing when it came to Breaking.

In 2007, I had produced the last Out For Fame Championship as my direction within the culture had shifted more towards non-profit community work that I felt was needed within the scene, and Cros1 had his own heavy tour schedule so we decided to make it the last year.

Today in 2012, I’m proud to announce Lean Rock of Boston as the official organizer for the Out For Fame USA Championship. Cros and I have full faith that Lean Rock will hold down our original mission for the championship and keep the fire within the USA scene lit.

With that said, thank you all for the support since OFF’s birth in 2000.

We also reached out to our brotha Lean Rock. This is what he had to say in regards to OUT FOR FAME:

Out For Fame has given the opportunity for many American crews to rise from the underground and become national champions/international contenders. OFF was the first B-boy competition to go on tour around the country and allowed crews to travel to different states to compete. Many well-known American B-boy crews as well as Djs have established their name in the competition circuit through OFF (Havikoro, Ground Zero, Skill Methods, Rock Force and Flava Squad to name just a few). The footage speaks for itself!

For anyone that travels the world knows traveling is the best way to get constant inspiration and motivation. Out for Fame is about the hunger, paying dues, and putting your crew’s rep on the line for the championship title. Im honored to be organizing the return of OFF 2012 3vs3 crew competition to the USA and hope to maintain inspiration to the North American B-boy scene.

Much love to Paulskeee and Cros1 for the original Out For Fame vision.

There you have it! From the old to the new, no matter the era, this culture is about the respect and fame you gain throughout the years. We are all OUT FOR FAME. 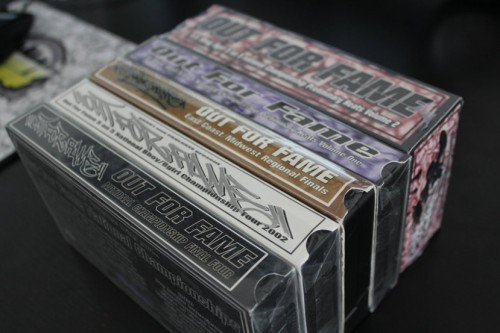 Our personal collection of Out for Fame VHS tapes

OUT FOR FAME has released over 60 videos from 2000-2007 and will be putting up more as we acquire the footage on http://www.outforfame.tv.

The 2012 OFF Finals Championship will be at the Mighty4 14th year anniversary in San Francisco, CA late-October or early-November. OFFICIAL DATE TBA.

Just some of the memorable battles of Out for Fame: