It was today, 9 years ago, that my life changed forever. OUTBREAK HIPHOP JAM took place in a small church spot in Pembroke Pines, a sub division of Fort Lauderdale, Florida. When my crew, Unique Styles, and I decided to put together our first ever jam, it was not because we wanted to make money or get fame. We truly had no idea of what was to come, and we just wanted to do something FUN– a fun jam for Florida bboys to come out and represent at.

Florida was a bit slow at the time, Pro-AM was not the mega event it was in late 90’s, Roast The Most was done, and A Breakers Dozen did not work out. We truly didn’t have much. My crew and I found ourselves traveling out of state to compete. We hit up states like Texas, Georgia, North Carolina, Illinois, Rhode Island, and California. 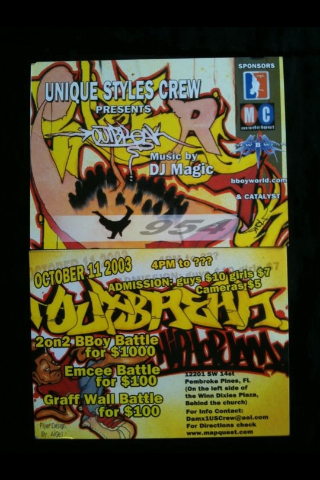 The flyer for Outbreak 1, created by Dwelz (Fresh Intelex) and Aige1

In the summer of 2003, during our trip to Spinfactor 4, we spoke about throwing a jam. On our way back, I took it upon myself to make it happen. The jam would be called OUTBREAK HIPHOP JAM. It would feature ALL ELEMENTS of the culture; breaking, DJing, MCing and Graff. We wanted to create OUTBREAK, and did we ever. Outbreak was held at a small church spot called CATALYST, a Christian Hiphop organization that provided us with an incredible training facility every Saturday, a place to go and enjoy ourselves weekend after weekend. Pastor Joe, the leader of Catalyst, was a bboy and a Hiphop head who understood us and when we told him about our idea, he was all in. You can tell from our first flyer we didn’t know what we were doing. Dwelz of Fresh Intelex Clothing did the artwork, and our good friend Aige from South Florida put it together. The venue had a capacity of 220-250, but we packed it with over 600 bboys, bgirls, and Hiphop heads from all over the USA. From that moment on, it was on.

Civil Wars came right after, then Civil Wars 2 in Jacksonville. During the Summer of ’04 came Civil Wars Orlando, and countless others. Outbreak 2 took place in Orlando, soon after came EVOLUTION, Yo Pack It up, Yo Check It Out, True To The Game Florida, Summer Slam Jam, Come Correct and many  others. Florida once again become the power house state Pro-Am had made it out to be. Bboys from all over the world were coming to the jams. Bboys like Luigi and Kevo stared getting international recognition. A new era in Florida bboying was born, and it all revolved around OUTBREAK HIPHOP FESTIVAL. 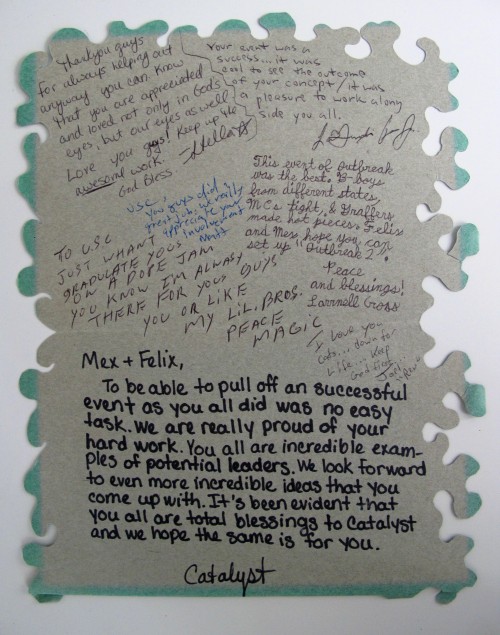 Card given to USC by the team at Catalyst after the first Outbreak, which is on display at The Bboy Spot till this day as a reminder of our beginnings.

Since those early days, the jam has traveled the world and back. With the support of the community, it has grown to become bigger and bigger, better and better, while ALWAYS keeping the formula my crew and I wanted. RAW, SIMPLE AND TO THE POINT, FUN. I am blessed to say that I never gave in, never had battles on stage, always paid the winners, DJ’s, and judges what they were promised.

THE QUESTION IS SIMPLE? WHY STOP NOW?

The answer is simple. I have come full circle. As I was looking for a date, I realized October 11th, 2013 will be on a Friday. 10 years to the date the original Outbreak Hiphop Jam took place. To me, it meant my job was done. For 10 years I carried a load in providing FLA my heart and soul. Many times I lost thousands of dollars; during Outbreak 3 in 2006 I was homeless but the event still took place. I gave my 20’s to this culture and community and now, after Outbreak 10 HipHop Festival my job is done.

This does not mean I’m going anywhere. I will be around just as much and The Bboy Spot will be supporting and attending events all over the world. My EU partners MG and MK will continue to put on quality events in Europe. We will always be very much involved in our community and culture. All good things come to an end but for me, it only means a new chapter will start. 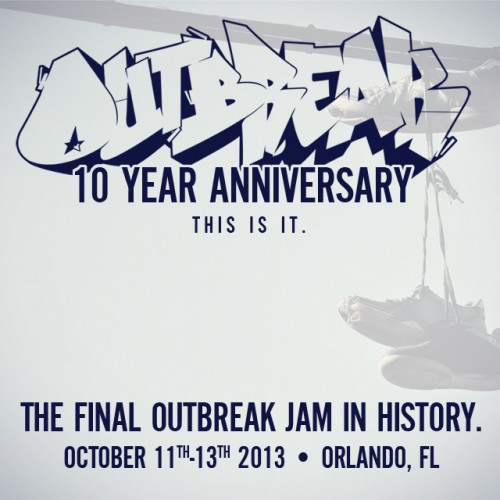 THANK YOU to everyone that has come to Outbreak, and made it what it became. I always knew I wanted to make a difference in our culture, and Outbreak gave me the opportunity to do that.
A DECADE OF FUN and A LIFETIME OF GREAT MEMORIES.