Hip Hop and Education. These two words at seem to be at odds with one another when one is pursuing their passion and/or attempting to establish a more mainstream career. The truth of the matter is most people give up one for the other. Despite all the struggles to balance between these two aspects of life, they don’t necessarily have to work in an antagonistic relationship. Rather both Hip Hop and Education can be utilized to strengthen the drive that one has to accomplish dreams and find a stable means of living. Reach out to the society through Hip Hop, become more articulate with language so you are able to express love for your craft, there are numerous ways to educate yourself through the culture, vice versa. By integrating the two, one is always learning. As they say, “Always student, Never Master.” Breaking, emceeing, DJing, and Graffiti, it is all applicable. 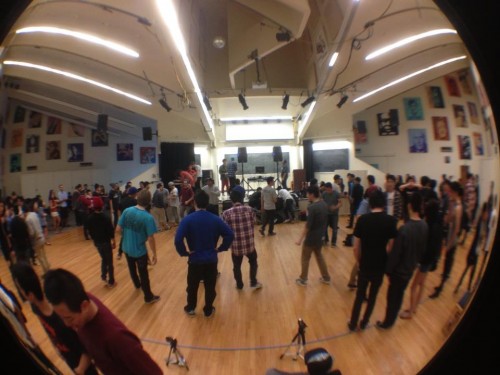 Mid-February I attended a jam that was focused on the Universities competing against one another, hosted by the University of California, Santa Cruz’s bboy club. Philosophy of Dance was the name of the event, a suitable title since students of all different backgrounds would not only be battling, but sharing in the experience and inspiration. The event itself isn’t what one would consider to be a typical bboy jam. The “Break Life” is different for everybody, as made evident by what was happening at the jam: students carrying textbooks and an extra pair of breaking shoes in their backpack, established bboys giving pieces of wisdom to the younger generation, etc. Even though everyone had a different focus in breaking and life, they all had come together to learn and grow as individuals and a community. It just so happened that on the very same day, after the competition in Santa Cruz, Nasty Ray’s 1nfamous was taking place in San Jose. Traveled out there for about an hour and half through traffic and was not disappointed at all. It was a dope jam to say the least and was organized well. The vision he had for the jam was refreshing, a statement for other step it up and have some quality control in regards to events. Big-Ups to Nasty Ray and the 1nfamous staff, Slug life (UCSC’s bboy club), and everyone else that made everything possible on that amazing Saturday.
Now someone might ask: what does this all mean? Well to be honest neither the path of Hip Hop and Education are so clean cut. Just because you have a college degree doesn’t mean you are going to be successful and dedicating yourself to your craft and nothing but won’t always fulfill you. Don’t limit yourself. Having knowledge of self and the world around you is possible beyond the cypher and the classroom. To summarize what a bboy said once you have to complete the circle in life to find happiness. It’s a flow and a cycle.
Video of courtesy of Nasty Ray: