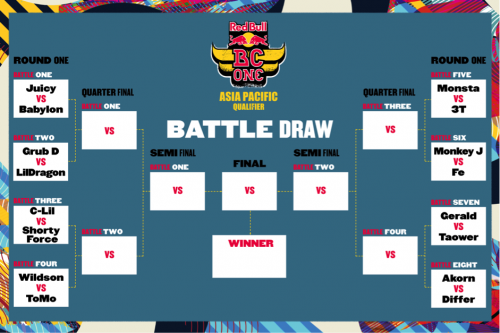 The Red Bull BC One Asia Pacific Qualifiers are just around the corner, set to go down September 1st in New Zealand at 7:30PM to 10:30PM (That’s 3AM EST Saturday). If that’s past your bedtime, no worries! Redbull BC One will have the videos available online for 7 days so you can watch it when you have the time. As before, The Bboy Spot will be displaying the live stream on our site for you to watch and discuss as the battles happen. Also, if you’re in New Zealand, the Red Bull BC One All Stars have been hosting workshops to lead up to this weekend’s competition. These workshops are offered free-of-charge in Auckland, Wellington, and Christchurch and are definitely worth your time! Scroll down past the live chat for more information on the workshops!

Here’s some more information from Red Bull BC One:

Asia Pacific’s Qualifier is one of just six competitions held globally where 16 B-Boys battle one-on-one to knockout their opponent. Only one competitor from each will win the chance to battle the worlds most talented B-Boys at the Red Bull BC One World Final in Rio De Janeiro, Brazil in December.

Four members of the worlds best B-Boy crew, the Red Bull BC One All Stars, will captivate the audience with special performances on the night, including current world champion ROXRITE (USA). ROXRITE, along with PELEZINHO (BRAZIL), RONNIE (USA) and TAISUKE (JAPAN) will also judge the competition with NZ reputable dancer, B-Boy Swervone.

The Red Bull BC One All Stars are hosting highly anticipated workshops this week in the lead up to the weekend’s competition. The world champion ROXRITE says he has never been to New Zealand and is excited about sharing his skills and knowledge and giving back to the community.

“I’ve heard great things about [New Zealand]. I know the Asia Pacific B-Boys have mad skills and I’m excited to see what moves they pull at the Qualifier,” says ROXRITE.

The free-of-charge Auckland, Wellington and Christchurch workshops will provide a unique opportunity for local New Zealand B-Boys to watch and learn about hip-hop culture from the world’s best. B-Boys can register for workshops by emailing bconewrkshops@hotmail.co.nz.

On competition night, DJ Mar Ski will spin the beats for the competing B-Boys, with the extremely talented beat-boxer RAHZEL playing MC host. Dubbed the ‘Godfather of Noyze’, RAHZEL is best known as being a member of “The Roots” and for his hit track “If Your Mother Only Knew”.

The Red Bull BC One event will welcome all 16 cypher winners, which include two of our very own New Zealand B-Boys, Grub-D and Akorn, both hailing from “Common Crew” in Christchurch.

Doors open for the event at 6pm with the competition beginning at 7.30pm. For more information visit www.redbull.co.nz/bcone

Red Bull BC One All Star Workshops

Media and local B-boys are invited to attend these:

Anyways, check back again for the live stream and chat! See you there!

Tags: bc one, Red Bull