It’s that time of the year again… Red Bull BC ONE North American finals! 16 of today’s top competitive bboys will battle it out for their chance to represent at this year’s Red Bull BC ONE in Seoul, Korea! In the line up we have some heavy hitters, O.G. Bboys as well as many newcomers.

BC One veterans like Gravity (2010) and VicNice (2012) look to make their way back to the finals as O.G’s Flexum and Lil Rock look to show the world they are still very much capable of defeating the younger bboys in the game. Newcomers like Vicious, Jeremy, Sawel, and Dang look to surprise everyone in their first ever BC ONE North American qualifier experience. 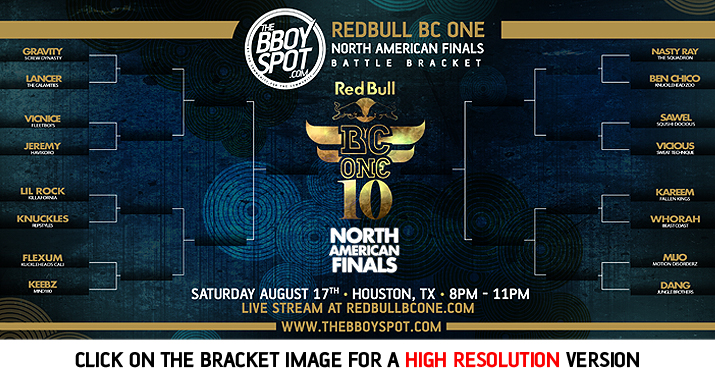 WHO WILL BE THIS YEARS NORTH AMERICAN CHAMPION?

Select your bracket, write down the names in the comments to enter. The person with the most guessed wins will be rewarded a $100.00 gift certificate from us at The Bboy Spot! In the event of a tie, the person that guessed the most wins first will be selected the winner.

Tune in this Saturday at 8PM Central Time at RedBullBcOne.com for the live stream of the event.