Lets go to the mid 90’s and the birth of what was to become the bboy/bgirl community in the USA. Breakin’ may have started in the 70’s but jams in the United States becoming what they are today didn’t really come about till the mid 90’s. In those days, it was all about meeting up, having fun, and getting loose. Jams didn’t have “competition” battles, the jams didn’t have categories.

By the late 90’s, the competition aspect at these events was in full effect. Winners would usually get a trophy and some XXXL shirts from the sponsors. Mind you, some of these events were charging $50+ for a 2/3 day event. By the early 2000’s going to a jam and winning $100 or $200 dollars was consider a big deal. Soon after crew vs crew battles for $1,000.00 dollars started coming into effect.

As social media became relevant and traveling to compete abroad became a reality, the events started giving out $5,000 or even $10,000 dollars. A few years ago at United Styles, Floor Lords gave away $35,000 in cash and $15.000 in prizes. It was the biggest pay out for any U.S.A event in history. 3 years ago Silverback Open came into effect and it all changed.

Check out the $ breakdown for Silverback Open Championships 2016. 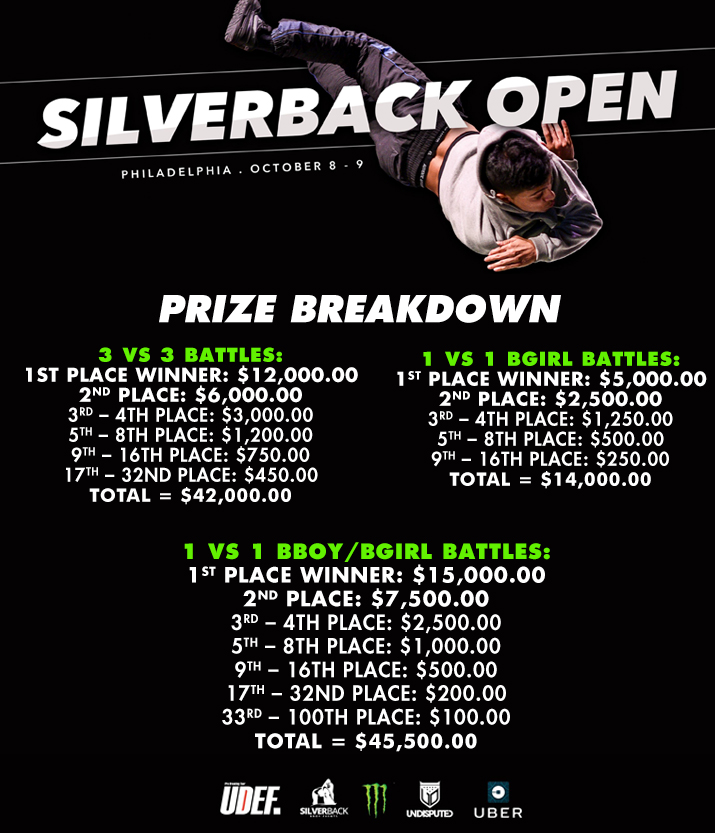 How far have we come as a community. Hopefully one day we get to write about the million dollar jam.
Silverback Open Championships 2016: Oct. 8th and 9th, Wayne PA.
SB Open FB event page HERE